In September 1950, a meeting was held in the small community of Silverton, comprised of dedicated men that shared a common goal: to protect the lives and property of their neighbors. That was the beginning of what became the Silverton Volunteer Fire Company # 1, Station 29.

By January 1951, the idea became a reality. The company, now incorporated, selected George Herbert to be it’s Chief. Construction began on the firehouse, until it’s completion in January 1953. During this time meetings were held at the members’ homes as well as the community center. The hard work of the founders paid off in January 1954, when the Dover Township Board of Fire Commissioners formally recognized our company.  The following are the founding members of the Silverton Volunteer FIre Company #1 that came together and became the founding fathers that chartered the company:

THE JOURNEY TO THE 21st CENTURY

The first piece of fire apparatus was a 1952 American LaFrance pumper, purchased from the Atlantic Highlands Fire Co. for $1.00. In 1955, the company was able to purchase its first new apparatus from TASC Fire Equipment in Wall Township. This pumper has since been completely restored, winning numerous trophies from around the state. From these modest beginnings, the company has grown to include three “Class A” engines, a 100 foot tower ladder, a rescue/extrication unit, two brush trucks, a water rescue/rehabilitations unit, fire police unit, and a 25 foot fireboat. During the past decade these units responded to approximate 350 calls for service each year. These call for service ranged from fire alarms, structure fires, motor vehicle accidents, boat accidents, hazardous conditions, water and ice rescues and public service calls.

The Ladies Auxiliary was formed in 1951 with Mrs. Nancy Herbert serving as the first president. The Auxiliary remains to this day an intricate part of the organizations. From assisting at fires and emergencies, to spending long hours fundraising, their contributions are invaluable.

In June 1976, the company celebrated its 25th anniversary. With the support of the commissioners and the residents of Silverton, a new building was dedicated, along with a tower ladder and chief’s car. Through the dedicated professionalism of our members and the support from their families, our dream of being one of the finest fire companies in the state had been achieved.

In November 2006 the voters of Dover Township approved the name change to Township of Toms River.  This changed our fire district to now be Toms River Fire District # 2.

On August 28,2011 Toms River and the rest of New Jersey was hit by Hurricane Irene.  This was more of a flooding event and was the costliest disaster in the states history to date.   Our members staffed the firehouse for days around the clock running calls along with assisting EMS on medical calls.

On October 29, 2012 Toms River, NJ was hit by Super Storm Sandy the calls were answered by volunteer members and numerous mutual aid companies, who put their lives at risk in an effort to save thousands.   The last run for Engine 2921 will forever stand as a reminder of our actions and dedication to our community.

In August 2013, the company celebrated with the support of the commissioners and the residents of Silverton, a new 101 foot tower ladder and 4x4 pump on the go engine.

In October 2016, the Jersey Shore and Northeast dodged a bullet that was Hurricane Matthew.  Unfortunately, residents in North Carolina weren’t as lucky where 28 deaths occurred, close to 100,000 homes and businesses were damaged, and officials are estimating that damages will cost an estimated $1.5 billion dollars.

Since the News outlets pretty much have only focused on the presidential race, most people across the country don’t know about the extent of the damage sustained from the Hurricane in North Carolina.  A donation collection to help out families in North Carolina that have been affected by Hurricane Matthew.  Silverton Volunteer Fire Company#1 wants to give back after all the help they received after Hurricane Sandy.

Our membership has steadily grown over the years. Each member draws on our traditions adding their individual talents to provide the best possible community service. We carry on the legacy of our founders.

The company has grown and changed over the years as 2020 we operate  2 Chiefs Cars, 2 “Class A” engines, a 101 foot tower ladder, a squad Class A  rescue/engine, a brush truck, a fire police unit, a 23 foot fire boat and a tech rescue trailer.

This year 2021, the company celebrates 70 years of service and recognizes its members for their unselfish, tireless dedication to their community. Through our numerous activities, a fire explorer program, Easter egg hunts, Santa Run, Flower sales, Chinese auctions, food and toy drives, dances, public safety day and most of all saving lives and property. We will continue the proud tradition of the Silverton Volunteer Fire Co #1.

We are Station 29 and proud of it. 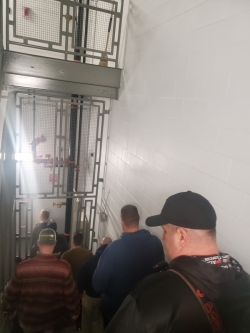 This site has been viewed 192,940 times.
News
Events
Pictures
Apparatus
Maintained by the members and staff of Silverton Volunteer Fire Company #1. Designated trademarks and brands are the property of their respective owners. Copyright © 2006-2022. YourFirstDue Inc. All Rights Reserved. Content on this web site is supplied by Silverton Volunteer Fire Company #1. YourFirstDue Inc. cannot be held responsible or liable for any content, text, pictures, or any other media found on this web site.
Management login
Powered by